The Rev. Abraham Colfe was vicar of Lewisham from 1610 until his death in 1657. During that time, he built a school for 31 pupils with the aim of providing education to under privileged boys. Colfe also provided scholarships to allow pupils to continue their education at prestigious universities. At his request and upon his death, Colfe’s will was entrusted to The Leatherseller’s Company, which was one of the oldest and well-established livery companies in London, they were required to continue the provision of education, bursaries, and scholarships and to provide five almshouses for spinsters and widows over the age of 60. The almshouses were built near St Mary’s church in the parish of Lewisham. Building work began in 1662 five years after his death and were completed in 1664. The almshouses were occupied by five parishioners of Lewisham, one of which was appointed by the Leathersellers’ Company from among the widows or daughters of poor freemen of the Company.

In 1620, William Hatcliffe, a wealthy Lawyer from South London instructed in his will that the annual income generated from his properties and lands was to be used to support the poor parishioners in East Greenwich, Lee, and Lewisham.  217 years later, in 1837, eight almshouses were built for residents of the ancient parish of Lewisham on land situated in Catford. In 1926 the almshouses were relocated to Bromley Road.

Colfe’s original almshouses survived until the Second World War. They suffered severe bomb damage and were ultimately demolished.  Hatcliffe’s almshouses fell into disrepair and required considerable refurbishment work. There were also drainage problems with the surrounding land and so they were also demolished.

The Leathersellers’ Company, who administered the funds of the charities, applied to the Charity Commissioners in 1958 for new almshouses to be built.  Lewisham Council agreed to an exchange of lands and the site of Colfe’s almshouses, adjacent to Lewisham University Hospital (now Lewisham Registry Office) was given up in favour of the present site at 347 Lewisham High Street.

The almshouses were completed in 1962 in accordance with the latest housing specifications. To help preserve the connection with the charitable trusts the building was called Colfe & Hatcliffe Glebe.  In 1990, the building was refurbished and converted from bed-sits with communal bathrooms and kitchens on each floor to 11 self-contained flats, including two with facilities for people with physical disabilities. The work was completed in 1994. Nine years later, further improvements provided an additional flat on the first floor, a communal lounge and kitchen on the ground floor and a new front entrance to the building. 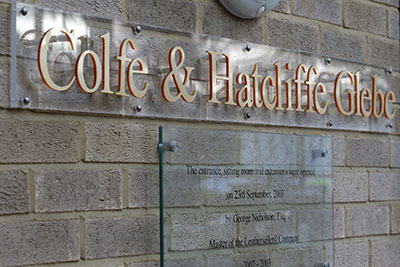 To arrange a time and date to view available almshouses contact: